Our members share there own real life story, the challenges, symptoms and their journey with a balance disorder. 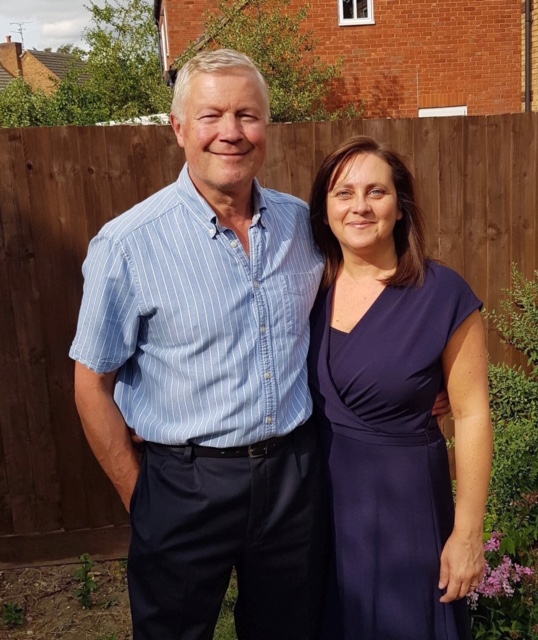 My name’s Gary Chamberlain and I’m sixty three years old.  I was a firefighter from the age of eighteen until fifty and thoroughly enjoyed my time in the service.  At one time I was on a high reach rescue squad which involved climbing tower cranes and dangling on lines at crazy heights.  Although I felt fear – obviously – I never doubted my balance at all.  Alongside this I was a keen karate student.  I fought for England and Great Britain and won a British Championships.  I coached a very successful club.  I suppose what I’m seeking to portray is that my life was full of challenging activities and my balance systems never let me down once.

Then about three years ago things changed.  I was coaching at the club one Saturday morning and noticed a very unusual sensation while demonstrating a drill that involved turning my opponent.  I shrugged it off and thought no more of it, but a bit later that day it came back as I reached into a cupboard.  The Tesco’s run came up and I found myself looking for things as my wife whizzed around.  Searching the racks brought a horrible dizzy sensation on that made me hang on to the trolley.  I felt physically sick and of course immediately thought people would sneer at this drunk shopping at lunchtime.  I was horrified.

On returning home – my wife drove – I went straight back to bed.  The room was spinning, even when I closed my eyes and I still felt sick.  Years of getting straight back to sleep after incidents helped me out and after about an hour, I woke up back to normal.  I was perplexed.

There was nothing for a few days.  Then it happened again and my default position if I was off work was to simply lie down for an hour.  It seemed to work.  Obviously, I knew something was wrong, so I went to my GP.  She looked in my ear and gave me a spray to use and some seasickness tablets.  She might as well have given me some smarties.  The attacks continued randomly until one particularly bad episode of spinning and vomiting worried my wife to the point that she called the doctor.  After the indignity of an injection into the rear to stop the vomiting,  she asked me to come into the surgery the next day and promised to refer me to a specialist.  At last I thought I’d be getting somewhere.

My appointment took a while to come through and I was ushered in to see a serious looking doctor.  He looked in my ears and pronounced them normal then a hearing test deemed I had lost some range in my left ear.  He arranged a scan at Loughborough University.  The appointment came and went and then … Nothing.  Any attempt to find things out was frustrating as the NHS didn’t seem that concerned.  Meanwhile the attacks were continuing and growing in strength.  I noticed I always had a head and neck ache in the hours preceding, so I could pre-empt the spinning and nausea by simply going back to bed.  I changed my pillows hoping that might ease the neck ache and after reading varifocals and vertigo are unhappy bedfellows, I changed my glasses back to low tech single vision ones.  Both of these measures helped yet the attacks continued.

After the scan results came back, I went back to see the specialist who announced that there was ‘nothing noteworthy’ and we would review in six months.  He also scrawled ‘possible Ménière’s?’ On his pad.  I nearly laughed out loud.  After working in an emergency service all my life, the thought of waiting for six months for any kind of treatment was extremely frustrating.

Then things came to a head.  I went in to my job at Bradgate Park early in the morning and started unlocking gates and pay machines.  The bending and turning brought on the worst attack I’d ever experienced.  I was in a terrible state.  Unable to stand and vomiting stuff I hadn’t seen for days.  My colleagues were very sympathetic and drove me home.  I realised I was in very real danger of losing my part time job – which I enjoy – and possibly my mental health as I felt absolutely wretched.  It is said that depression is when you lose hope that tomorrow will be any better and I could feel that gloom starting to surround me.  I’m fairly tough and intelligent so I realised I had to take action rather than sink into despair.

So, I googled Ménière’s and saw a world renowned specialist ran a clinic in Leicester.  I picked the phone up and rang Professor Peter Rea’s secretary and she booked me an appointment.  At last I felt something was about to be done and hope reappeared.  The appointment was a pleasure.  I explained what had happened to the professor, with my wife – who has been a rock throughout – filling in the gaps.  (It’s true they never forget a thing). He took notes and did some simple tests then told me his secretary would be in touch to arrange tests.  The next day the phone rang at 0900hrs and I was invited to attend the London Road clinic.  Tests were completed within days and a follow up appointment confirmed the diagnosis.

Professor Rea was upbeat and optimistic.  He offered a treatment of two injections of steroids into the inner ear and promised a 90% reduction in symptoms.  That sounded good to me, so we arranged the date.  I’d be lying if I said the treatment was a breeze, but it was no more than uncomfortable.  At the same time the professor advised I should reduce my salt intake and cut out caffeine.  Up until this point I’d enjoyed about ten mugs of strong tea a day and a cooked breakfast, followed later in the day by bacon cobs etc etc.  I decided to change my diet on the spot, aided by my wife telling me I’d struggle to do it.  I cut out caffeine immediately and had a headache for a week.  Not pleasant but endurable if you have a good reason.  With my diet I simply cut out processed food (often heavy in salt) and stuck to things that either grow, graze, swim or fly.  I wanted that 10% the professor couldn’t promise.  The fire service mindset kicked in with a new burst of optimism.  I spent my whole career facing bad situations and combining good habits and smart choices to get the best result.  There was no reason why that approach wouldn’t help here, so within a few weeks I changed from a victim to a predator, hunting that last ten percent.

I’ve always exercised and decided to drop strength training temporarily and focus on balance.  I took up yoga – although I refused to wear Lycra – and set off daily on brisk walks at the Outwoods where uneven paths challenged my balance.  I also read extensively on a system called ‘original strength’ and incorporated their methods into my daily balance training.  It worked for me and I’d urge anyone from athletes to pensioners to give it a try.  It is infinitely scalable so you can work at your own pace.  Many of the drills require nasal breathing with the tongue pressed lightly on the roof of the mouth as apparently the tongue is important to the vestibular system.  I didn’t see the connection either but I’m a pragmatist.  I still had the odd bought of neck pain, so I googled ‘neck pain and Ménière’s’ where to my surprise I found an American specialist had noticed a link between neck trauma and Ménière’s.  I booked to see a chiropractor who diagnosed my axis bone was slightly out of line.  Following a course of treatment, I no longer suffer neck aches at all.

So today, seven months after the treatment at London Road I feel ‘normal’.  In fact, I’m two stones lighter, sleep better, work and drive without any fear of attacks and I’m back lifting the same weights I did before Ménière’s reared its ugly head.  I don’t know if it was diet, exercise or the neck treatment that helped claw back the ten percent, but I am extremely grateful for all the advice and treatment I have received.

My conclusion is that Ménière’s is a horrible condition.  Because it doesn’t kill you it’s not taken terribly seriously by the NHS.  The cost of private treatment may deter some but in my mind is worth every penny.  Small changes to diet and exercise are an inconvenience at first but for me were a huge benefit.  Above all a positive mindset is key.  Become a predator and hunt for every improvement you can get.

I wish you all the best and would like to record my thanks to Professor Rea and his team at London Road.  He restores hope and changes lives.  What could possibly be better than that?

Thank you to all of our members who have bravely shared their life stories with us. We hope these stories help fellow sufferers feel less alone, and for the general public – provide valuable insight into the severity and life restricting nature of balance disorders.

Thank you to our Balance Warriors!

Please share your own story with us, so we can reach and help even more people. All are welcome to join, whatever your balance condition and where ever you live.

Please come and join us if you feel we can help and your don’t wish to face your challenges alone.

One thought on “Our Members Stories – Gary Chamberlain”